The seventh and last APPEACE meeting was organized in Montegridolfo on the occasion of the local event called “THE LIBERATED MONTEGRIDOLFO”, a territorial performance reminiscent of the breakthrough of the gothic line. The event lasting 15 days commemorated the important historical moment through a series of thematic activities.

Among the others, the programme proposed visits to the German defences (bunker stations, etc.), the “Kommandantur” and the English camp, showing of the film “From the Metauro to the Foglia River” from “A. Gaffarelli ” archive and the opening of “A. Gaffarelli” archive with a brief presentation by A. Agnoletti and D. Diotallevi.

Academics and historians attended the event in different conference moments “Gothic Line, a name for propaganda” (T. Maffei); “W. Churchill and the attack on the Gothic Line” (A. Agnoletti); “Contribution of the Italian Army to the Liberation” (D. Diotallevi).

The event gave space also to commemorative performances, in particular the Commemoration of the battle of Montegridolfo with the heroic act of Lieutenant “Norton” performed by the “The Green Liners” and the commemoration of the last armed confrontation in front of the village between “English” and last-resistant “German” to be conclude with the “English” come into the square with the wounded Ten. Norton leading the “German” prisoners.

In the intention of involving the greatest number of participants, the programme included also artistic, theatrical and musical entertainment with shows, concerts and a dialect comedy “September 1939”, story of three contenders for the innkeeper at the beginning of the Second World War.

During all days, a video on APPEACE project and partners was shown at the Museum of Gothic line in Montegridolfo and Gothic Line Museum of Montescudo.

The first day of activities at the presence of APPEACE European project partners, started on Thursday 25th August 2016. The Mayor of Montegridolfo welcome the audience at Grotta Azzurra where Technical Meeting was organized dedicated to the project activities. During this meeting, partners spoke about the reporting activities for the APPEACE project, the launch of the APPEACE survey, the NETWORK OF WAR PLACES FOR PEACE and the future collaborations. The technical meeting was followed by a guided Tour to the historical centre, the San Rocco Church, and the Museum of Goth Line.

The afternoon was devoted to the guided visits to the cemeteries of Montecchio, Tavullia (Canadian Memorial), Gradara and the Greek Cemetery in Riccione. The participants commemorated the places by deposing crowns.

The second day (Friday 26th), the event continued in Gemmano with a visit to the exhibition “The Battle of Gemmano”. 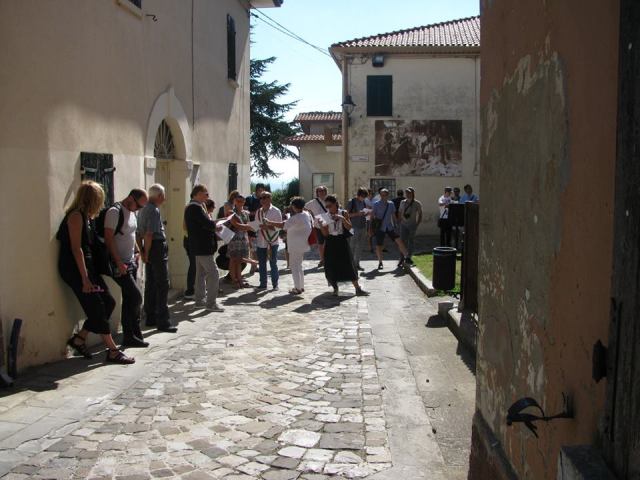 In the afternoon, the delegation firstly visited the village of Casteldelci accompanied by the Mayor Luigi Cappella, then a guided tour of the massacre site of Fragheto.

The third and last day of the event (Saturday 27th) ended with thematic speeches by Daniele Diotallevi, Alessandro Agnoletti, Terzo Maffei before the Screening of the films: “The Liberated Montegridolfo ” and “APPEACE: War Places- Peace Citizens” (Production I Fanti).

This entry was posted in Senza categoria. Bookmark the permalink.